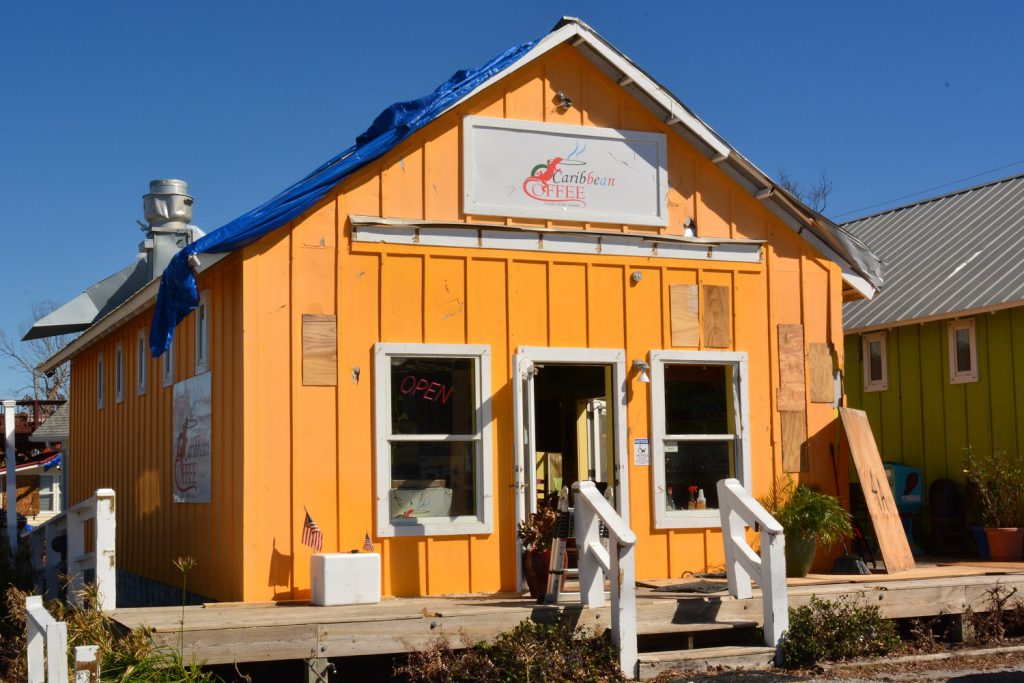 Nestled among a colorful row of small businesses in Mexico Beach is Caribbean Coffee, a café that serves coffee, tea, smoothies, sandwiches, and freshly baked pastries daily in a laid-back, island-inspired atmosphere.

Caribbean Coffee was a dream owner David Kiser had for twenty years before starting the business in 2013.

“I always wanted a coffee shop so…when I had the opportunity about six years ago, my wife told me I better do it because I wasn’t getting any younger,” Kiser said. “We’ve got good people [in the community] and they supported me. I thought I needed a good cup of coffee in the area and they did too.”

Kiser recalls the shock he experienced after returning to town to see how his home and business fared.

“When I drove into town after the storm, I had only seen the pictures on TV,” Kiser said. “I’m a Floridian and have been through many hurricanes. [This was different.] There were houses in the middle of the street. I couldn’t catch a landmark because all the landmarks were gone. When I drove up to the cafe, I felt blessed because the building was still there. I couldn’t believe it compared to the damage across the street – I had a building in my yard.”

The experience has been very moving for Kiser, who was born 15 minutes away.

“I get depressed during my drives to and from work. They tore down a bistro that I used to go to this morning…I had somebody tell me today something that I hadn’t thought of before, which is survivor’s guilt. People who survive with little damage carry a certain amount of guilt. It’s like PTSD for people that lost everything they had.”

Recognizing that the community needed him, Kiser set about reopening as quickly as possible.

A week following the storm, he opened his doors to serve weary fire responders and residents free coffee from the porch of his damaged cafe using a gas burner.

“They would come in and sit for an hour or so to unwind,” he said. “We did that for them until they left town.”

After learning about the state’s Florida Small Business Emergency Bridge Loan program, Kiser contacted the Florida SBDC at the University of West Florida (UWF) for help. When asked about his experience, he described:

What type of damage occurred?

Our windows, doors, front wall, overhang, and roof were damaged. We also experienced a loss of income due to the loss of utilities and damage to the building.

How did the Emergency Bridge Loan help?

The bridge loan was great. We were able to get the money within a week. I wanted to reopen quickly because I thought the community needed a sense of normalcy. I was able to get a contractor quickly and reopened on November 19. The day I reopened I was so happy that I gave customers everything for free.

How helpful was the Florida SBDC at UWF?

Extremely helpful. The Florida SBDC helped us out when we were in need. They helped me with the application and with any questions I had.

One year later, small business owners like Kiser continue to pick up the pieces and make sense of their new normal. According to Kiser, his business has recovered physically, but not financially. He credits a loss of their customer base as their biggest challenge.

Battered but resilient, Kiser continues to serve as a beacon of hope for his community.

“Our café gives people an outlet to discuss their problems and successes: whether they got sheetrock, found a sheetrocker—which is a hard thing to do—got their roof, or have their new carpet scheduled for installation tomorrow.”

In a town that doesn’t allow large corporations or large chains, small businesses are critical to the community, so every day that one reopens is a small win.

“This community is small business,” he concluded. “Every business here is a locally owned small business, so that’s the way we function. It’s small town at its best.”

Administered by the Florida Department of Economic Opportunity, in collaboration with the Florida SBDC Network, and supported by Florida First Capital Finance Corporation (FFCFC), the Florida Small Business Emergency Bridge Loan is a short-term, interest-free working capital loan intended to help small businesses “bridge the gap” between the time of a declared disaster and when the business has secured long-term recovery resources, such as insurance proceeds or federal disaster assistance.

As a principal responder in the state’s Emergency Support Function for Business, Industry, and Economic Stabilization, the Florida SBDC Network supports disaster preparedness, response, recovery, and mitigation through its Business Continuation Services. As part of its service offering, Florida SBDC professionally certified consultants and disaster specialists are available to provide confidential, no-cost consulting to help affected businesses prepare disaster loan applications and with other post-disaster challenges.

"[The Florida SBDC at UWF] was extremely helpful. They helped us out when we were in need. They helped me with the application and with any questions I had."