Advanced IT Concepts, Inc. (AITC) is a Central Florida-based Service-Disabled Veteran Owned Small Business (SDVOSB) and SBA 8(a) Minority-Owned Business that has, on the strength of its founders’ diligence and hard work and with the help of the Florida SBDC at UCF, achieved impressive growth and success.

Lieutenant Colonel Gabriel (Gabe) Ruiz retired from the U.S. Army in 2006. Since then, he has leveraged a military career in information technology and an entrepreneurial spirit to help chart AITC Inc., which provides IT consulting services and value-added resale of computer hardware and peripherals to both the government and private sectors, to new heights. 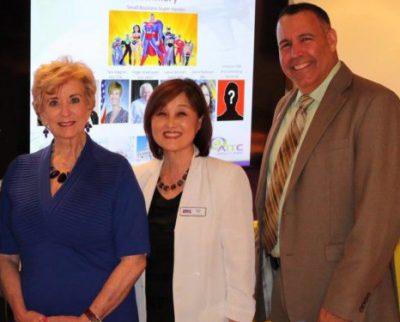 After founding the company with his wife Sandra in 2010, Ruiz embarked on a mission to accelerate AITC’s growth. Seeking assistance, he turned to the Florida SBDC at UCF—in particular its Growth Acceleration Services and Advisory Board Council program, a special service of the Florida SBDC at UCF that matches qualified businesses with a local advisory board.

As a testament to Ruiz’s leadership and the company’s extraordinary growth, he was named the SBA’s 2017 Small Business Person of the Year for the North Florida District.

In the community, Ruiz and the entire AITC team support and participate in numerous important causes, including the Muscular Dystrophy Association, Wounded Warriors, Nemours Children’s Hospital and United Cerebral Palsy of Central Florida. Further, the company firmly believe the success of their customers is imperative to the safety and welfare of our country. Therefore, they also support the U.S. Army, U.S. Air Force, Veterans Administration, and the Department of the Interior.

Ruiz credits the Florida SBDC at UCF with assisting him in accomplishing his company’s remarkable growth.

“The Florida SBDC at UCF has been a true and invaluable partner to AITC,” said Ruiz. “From our first meeting with our consultant, who showed a true caring attitude and superb business knowledge, we have received expert advice in areas such as marketing, business development, budgeting and forecasting, operational effectiveness, and more.”

"Additionally, the Florida SBDC at UCF has facilitated AITC’s participation in their Advisory Board Council program. The ABC provided a team of senior business experts that contributed guidance in all business areas. Today, we are a much improved, stronger and better positioned company due in great part to the outstanding support and guidance provided by the Florida SBDC at UCF"