Success tastes sweet for Fruitique, a Hialeah-based ice cream manufacturer that is expanding beyond the South Florida market. 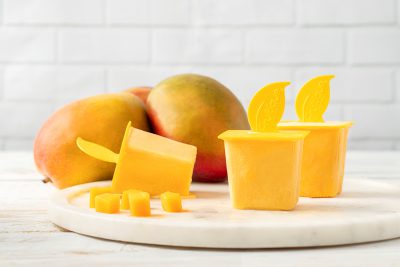 Launched in 2011, this family business has scooped up a niche in the market by focusing on Caribbean flavors that are popular with Latin consumers, including coconut, passion fruit, mamey, guanabana and Miami-inspired specialties such as guava-and-cheese.

Now the company, owned and operated by brothers German and Juan Puerto, is taking the taste of the tropics to New England, where it is introducing the Fruitique brand.

“We’re very excited for this new market into which we’re expanding,” says German. “We’ve proven that we can be successful in South Florida, especially with Latins, but now we’re getting into a different market, different demographics and the feedback has been excellent.”

The new market is a long way from the company’s beginnings in Miami, where their father started the business by selling primarily to local restaurants. After the sons joined the company, they realized they needed to take a more methodical and strategic approach to grow the business.

Today, Fruitique ice creams are available at restaurants and food stores throughout the region, from the Florida Keys to Orlando, and at retailers that include many CVS and Winn Dixie stores. Juan, a chef who also focuses on marketing, says the key to him was expanding his understanding of package design and point-of-sale displays – knowledge he gained from one of the consultants at the Florida SBDC at FIU, the small business development center at FIU College of Business. The center provides a team of business experts who work with business owners at no cost to help them grow their companies.

“There is a lot of competition,” says Juan. “So differentiating ourselves has been a big challenge. The SBDC has helped me a lot. One of the consultants has a food background in consumer-packaged goods. That’s what opened my eyes to even researching the industry more and learning from bigger brands.”

The brothers say the ability to obtain a bank loan with the assistance of Florida SBDC at FIU marked an important turning point for the company, which has expanded production with more employees, as well as with more efficient equipment.

In addition to receiving advisory, German also participated in Hacia Ganancia, a Spanish-language financial training program offered by the Florida SBDC at FIU.

The training and consulting he has received, German says, is allowing him to make better financial decisions and better plan for the future, including decisions regarding pricing and expansion projections.
Should New Englanders take a liking to Fruitique’s flavors, the company hopes that the market will be only the first of many outside of Florida. At that point, the company’s future could be fruitful indeed.

"The SBDC has helped me a lot. One of the consultants has a food background in consumer-packaged goods. That’s what opened my eyes to even researching the industry more and learning from bigger brands."