It’s no secret that small businesses play a sizable role in the Florida economy. Recent numbers from the U.S. Small Business Administration illustrate that point.

According to the SBA’s annual “Small Business Profiles for the States and Territories” report, Florida is home to close to 2.2 million small businesses, defined as companies that employ fewer than 500 people. 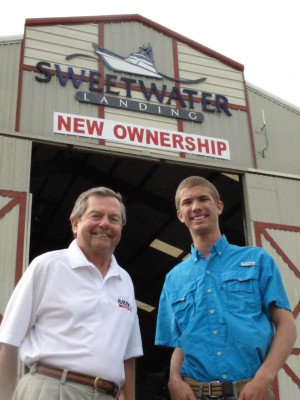 Brandon Mayer (right), a 2014 management graduate of FGCU’s Lutgert College of Business, is among the growing number of young entrepreneurs nationwide. In 2014, Mayer became the new owner of Sweetwater Landing, a marina providing dry and wet boat storage in Fort Myers, thanks to the assistance of FSBDC at FGCU business consultant Norm Jacobson (left).

There are other reasons to be optimistic about the state of small business in Florida and the country as a whole. For instance, entrepreneurship, which took a dive after the Great Recession of 2007-09, is on the rise, according to a report by the Global Entrepreneurship Monitor,

The study, which looked at 200,000 people in more than 70 countries, found that approximately 14 percent of Americans were either running or founding a company in 2014. That’s up from 7.6 percent in 2010 – a post-recession low.

Leading the charge are young people. Millennials – those who reached adulthood in the early 2000s – are the age group most likely to start a new company, the study found. In fact, nearly a fifth of those between 25 and 34 years old engaged in entrepreneurial activities in 2013.

“It was a huge relief knowing that there was a place like the FSBDC where we could go to for help after the hurricane. The flow between my office and the FSBDC was really smooth and decision making was really quick so we’re really happy with the whole, entire process. ”