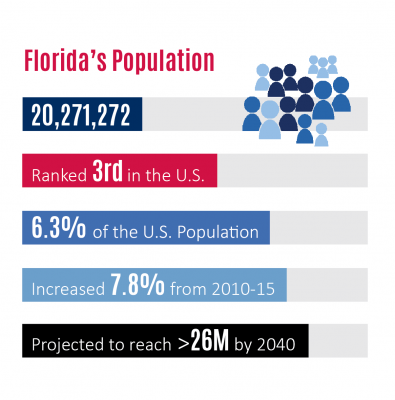 Florida’s population continues to grow, with the U.S. Census Bureau estimating that, as of July 2015, over 20 million people or 6.3 percent of the U.S. population call the state home; ranked third only behind California and Texas. The state’s population has increased 7.8 percent between 2010 and 2015 and is projected to reach over 26 million by 2040.

On Average, 1036 New Residents Move to Florida Each Day

The U.S. Census Bureau’s Survey of Business Owners (SBO) routinely collects data on the economic and demographic characteristics of the country’s business owners. The survey is released every five years on years ending in “2” and “7”.

Florida ranks second behind Vermont (23%) in the proportion of business ownership to the adult population.

The number of business owners in the state of Florida grew steadily between 1992 and 2012. However, growth slowed drastically between 2007 and 2012, only increasing 4.5 percent, during that five-year period. Much of the slowdown can be attributed to the Great Recession. These numbers suggest that, despite the Recession officially ending in June 2009, business ownership has not experienced the same type of growth it did prior to the crash. Despite lower growth rates from previous years, business ownership in the state did grow faster than the rest of the country (2.0%) during the same time period.