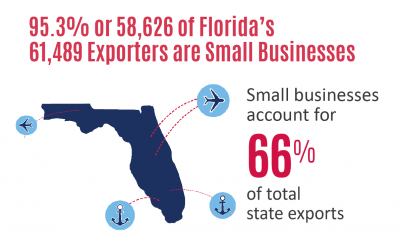 The impact of international trade in Florida is undeniable. International trade comprises 17 percent of Florida’s economy, with more than $153 billion in trade value moving through the state’s air and seaports each year.

In 2015, exports from Florida contributed to the $2.23 trillion of goods and services exported from the U.S. Further, as of 2013, international trade supported 2.5 million jobs in the state. [1]

According to the U.S. International Trade Administration, in 2015 Florida’s largest export markets were: 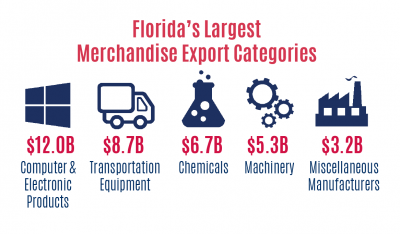 As of 2013, there were 61,489 companies that exported from Florida. Of these, 95.3 percent were small and medium-sized enterprises with fewer than 500 employees. These firms generated over two-thirds, or 66 percent, of the state’s total export value.

While exporting provides a number of benefits, only a fraction of Florida’s small businesses—roughly 2.8 percent—export. Nationally, only five percent of small employer firms export. Often small businesses are at a disadvantage due to a lack of resources in navigating the complexities of trade, including identifying potential customers and suppliers. [2]

To help combat this issue, the Florida SBDC Network and Enterprise Florida, in partnership with the U.S. Commercial Service, offer a scholarship export assistance program to help Florida businesses identify overseas growth strategies. Through the partnership, qualified new and infrequent export manufacturers and professional service providers have the opportunity to meet with Florida SBDC International Trade Specialists to prepare a customized export marketing plan. The plan, which takes an average of 120 hours to develop, includes a thorough export readiness assessment, industry analysis, market analysis with target market recommendations, a review of overseas trade opportunities, and an action plan that includes export promotion programs and services.

“[The bridge loan] helped us to serve all these children in our center,” she says.  “People have asked us how we did everything that we did in the amount of time that we did it, and I tell them, “we worked really hard, and we had that bridge loan in place, courtesy of the Florida SBDC.  It definitely worked out!”