Florida is leading all states in the rate of increase in the number of non-employer businesses, according to the most recent statistics from the U.S. Census Bureau. [1] 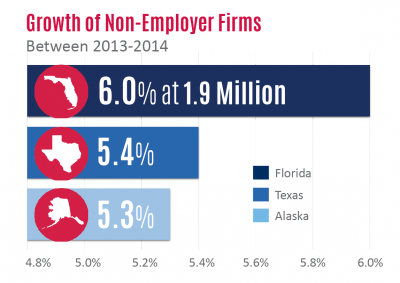 Between 2013 and 2014, Florida’s number of non-employer businesses grew 6 percent to 1.9 million. The state was followed by Texas, which jumped 5.4 percent and Alaska, which grew 5.3 percent.

According to the U.S. Census Bureau, “most non-employers are self-employed individuals operating unincorporated businesses (known as sole proprietorships), which may or may not be the owner’s principal source of income.”

As the data suggests, as the “gig economy” continues to grow, many non-employer businesses are finding ways to run their businesses without hiring additional employees.Led by ride-sharing service Uber, the “gig economy” refers to temporary freelance projects and assignments versus traditional long-term careers.

Florida is ranked 3rd in receipts, between 2013-2014, for non-employer businesses.
$84.6 Billion – Only behind California and Texas

Increasingly, non-employers are starting businesses that do not require additional help or they are outsourcing their needs to independent contractors to avoid hiring employees. The ability to outsource greatly reduces the additional time, paperwork, and costs beyond basic salary associated with additional employees. 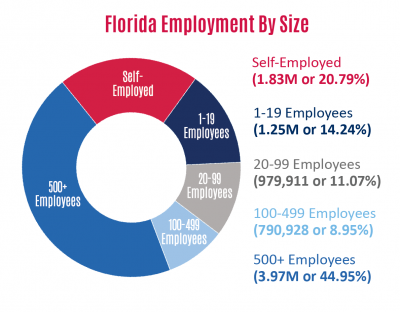 As mentioned previously, according to the Census Bureau data, all other personal services; janitorial services; and the offices of real estate agents and brokers were the top three industries with the largest number of non-employer firms.

Florida also led in the number of non-employer establishments per adults aged 18 and older, with 12.3 non-employer businesses for every 100 adults.

Florida was third behind only California and Texas in receipts for non-employer businesses between 2013 and 2014 at $84.6 billion, according to the Census Bureau.

“Working with the Florida SBDC at UCF [through the bridge loan process] was great. They were amazing. The process was extremely fast; not more than a week and a half. And really simple. ”