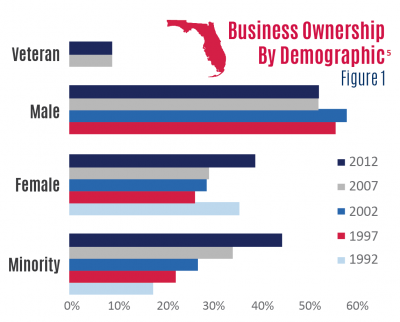 Proportionally, female business ownership is still significantly lower than the overall female adult population. Nationwide, females make up 51.3 percent of the adult population ages 18 and up—statewide is at 51.7 percent.

While the percentage of minority and female-owned businesses have increased, there has been little change in the percentage share of male-owned businesses. In 2007 male business owners made up approximately 51.6 percent with little change in 2012 (51.7%). This trend is consistent with male business ownership nationwide which only grew by approximately 2.5 percentage points between 2007 (51.3%) and 2012 (53.7%).

Veteran-owned businesses have also seen little change at both the state and national levels. In Florida, veterans make up 8.8 percent of business owners compared to 9.1 percent nationally. The SBA notes that the veteran population is older than the non-veterans population. [4] As this population continues to retire or pass away one can expect the percentage of veteran-owned businesses will continue to decline. 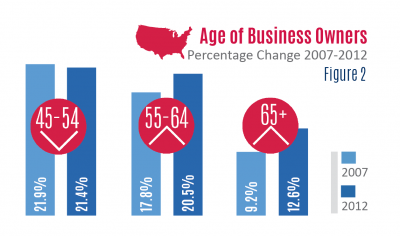 These statistics are consistent with an aging Baby Boomer population that continues to work beyond retirement. This generation was greatly impacted by the 2007 Great Recession as many companies sought to cut costs through early retirement incentives. At the same time, many lost significant amounts of their retirement savings with little time remaining to make up for losses. Therefore, one explanation for the increase in business ownership is likely due to necessity rather than desire.

[3] The U.S. Census defines ownership by gender as a business where 51% or more of the business is owned by either males or females. Businesses can also be classified as “equally male-/female owned” if ownership is split 50/50 percent.
[4] “Demographic Characteristics of Business Owners,” Small Business Administration, January 16, 2014.
[5] Note: Some data not available for each year.

“Working with the Florida SBDC at UCF [through the bridge loan process] was great. They were amazing. The process was extremely fast; not more than a week and a half. And really simple. ”