Federal government contract awards continue to be a source of sustainment and growth for many Florida businesses, and a key economic driver in Florida.

Last year (FY2015), Florida had the seventh highest federal contract total spend by state, at a value of $13.620 billion, however this represented only 0.2 percent growth from FY2014. Of this amount, in Florida, defense agencies spending at $10.187 billion continued to be significantly higher than civilian agencies spending of $3.433 billion. [1]

The top three markets for federal spending are defense and aerospace, professional services, and information technology (IT), which accounts for more than half of the reported spent in FY2015 (see Figure 1). In addition to defense and aerospace, the markets where defense spending accounts for the majority of the total spent include: Architecture, engineering and construction; health services; machinery equipment and tools; and chemicals, fuels, and lubricants. 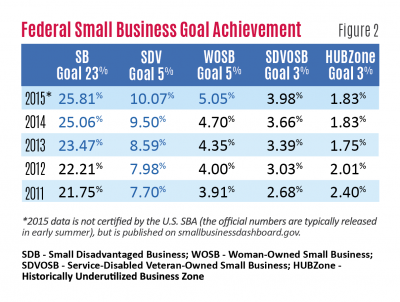 State and local government agencies also represent a large market segment for Florida’s small businesses. Florida ranked fourth highest in the nation in terms of state and local government agency spending, with a total value of $164.382 billion in FY2015, slightly up from $164.272 billion in FY2014. [3] This includes spending by cities, counties, and school districts, colleges and universities.

“Receiving funding was easy because our plan was bullet-proof and we had the numbers to back-up our goals. To date, we are now more efficient, and more profitable than we ever have been in the history of our company.”