According to a recent study by Geoscape and the United States Hispanic Chamber of Commerce, the number of Hispanic-owned businesses nationwide is expected to grow to more than 3.22 million in 2014. This represents a 43 percent growth rate since 2007, a figure more than double that of all U.S. firms. 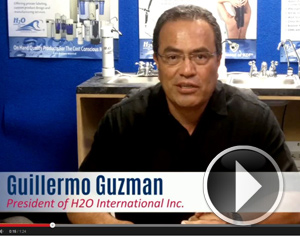 International expansion of H2O International, Inc. has always been part of the business plan for President Guillermo Guzman. Guzman is a civil engineer who, prior to starting his business in 1993, worked as a structural engineer for 10 years whereby he was involved in several bridge and major interchange projects in South Florida.

H2O International manufactures Point-of-Use and Point-of-Entry water filtration products for domestic use and, in addition, a patented line of shower filters using KDF media for chlorine removal. Guzman knew that there would be a high demand for water filters and water purification equipment globally and, thus, worked with the FSBDC at Fort Lauderdale to develop an Export Marketing Plan through a grant-funded program with Enterprise Florida. 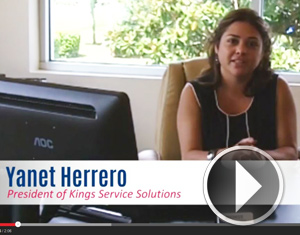 In late 2009, Arnaldo and Yanet Herrero of Kings Service Solutions (KSS) first approached Florida SBDC at the University of Central Florida Advisory Board Council Program Manager Jill Kaufman about their interest in becoming a client of the program. In 2010, KSS was accepted and an advisory board was formed to address the company’s needs. The board helped them put in place an organizational structure, systems, and processes to better manage the company and facilitate their growth.

When KSS became a client of the Advisory Board Council, the firm had a staff of six full-time and 37 part-time employees and leased a 1,700 sq. ft. office. Just over four years later, KSS has grown to 318 full-time and 200 part-time employees. Annual revenue jumped 270 percent from 2010 to 2012 and the company now owns its 3,500 sq. ft. office and warehouse suite. Importantly, the Herrero’s also strongly believe in giving back to the community, and KSS is a devoted supporter of a number of nonprofit organizations such as Boys and Girls Clubs of Central Florida. In May, Yanet Herrero received the 2014 LATINA Style Entrepreneur of the Year Award by LATINA Style Magazine.
Watch Video

The Florida SBDC is proud to celebrate the accomplishments of Mr. Guzman, the Herrero’s and all Hispanic-owned and Hispanic-led small businesses across the state.

“The SBDC, especially [business consultant] Bill McKown, made me aware of the process, explained the application requirements and assisted me through every step of the loan process. I am very grateful for his guidance and follow through!”